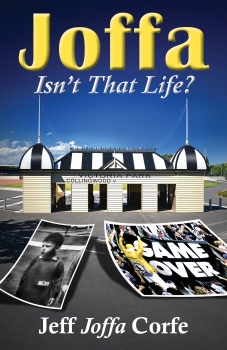 Joffa: Isn't That Life? Jeff Joffa Corfe Release Date: 1 June 2015 ISBN: 978 1 925260 29 8 RRP: AU$25.00 + $5 P&H Category: non-fiction, autobiography Format: Softcover (234 x 153mm, 240 pp) Back cover blurb: People have a misconception that Joffa is nothing more than a bogan, a loudmouth in the Collingwood Cheer Squad. But there's more to the man than the image popularly espoused through the media and by people whose only interest is to cut him down. Did you know Joffa came from an abusive household, that he was homeless as a teen, and about the countless hours of volunteer work he does for causes such as epilepsy, homelessness, and mental health? Did you know that football saved his life? In all likelihood, all you've ever really known about him is he follows Collingwood, but do you know about any of the machinations that go on behind the scenes as a supporter in the mighty Collingwood empire? Joffa: Isn't That Life? is a story about Joffa's life in his own words. Whether you admire the man or loathe him, the only way you'll ever get to know him – and get to know the true story about what makes Joffa tick – is through Joffa: Isn't That Life? ‘Regardless of whether you barrack for Collingwood, Carlton or Essendon, Joffa's story cuts through the crap to tell the true story of a footy tragic rescued by Aussie Rules who sees life through eyes much wider than the ordinary fan. ‘While he epitomises the every day supporter, Joffa's extraordinary story goes deeper than the grandstand and espouses life lessons learned humbly that will shock and reward the reader in equal measure. ‘Brutally and sincerely honest, Joffa: Isn't That Life? takes the reader on a journey from go to woe that screams “ball” with human spirit.' Peter Rolfe Sports affairs reporter Herald Sun

How was your experience today?